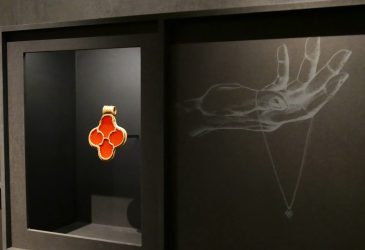 Customer: Gamla Uppsala Museum, Sweden Task: 300 square meter exhibition entreprise Purpose: Dissemination of the area as a historical center of power The area near Old Uppsala, testifies with several large burial mounds, to a historic royal centre – dating back to a period before the Viking Age. The museum wanted a new base exhibition, […] 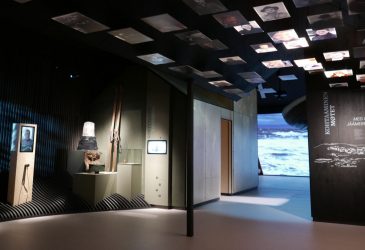 Customer: Vadsø Museum, Varanger / Norway Product: 300 sqm. exhibition contract Purpose: Dissemination of historical migration and identity , Vadsø Kvenmuseum is a cultural history museum that looks back at the origins of Finnish immigrants and how these people have integrated into Norway without losing their original identity. No Parking has had a turnkey contract […] 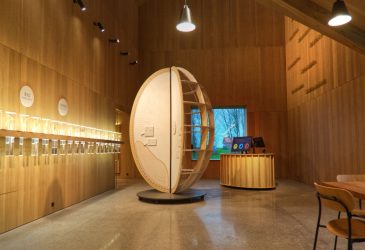 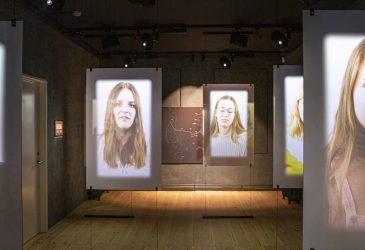 The exhibition is a modern reflection of history, with a focus on identity and culture The German minority was born out of the the referendum in 1920. The new exhibition focuses on German identity, and a flirtation with Nazism, before they became a contemporary co-actor in the southern Jutland border country. No Parking has been […] 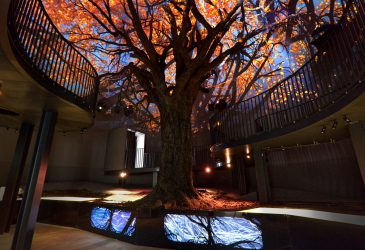 Visitors stand for a full 12 minutes and are completely captivated in the transformation of the “Tree of Life” Naturkraft is a new experience center in Ringkobing, which combines a huge park, with a large communication building with several exhibition pavilions. The project has been underway for several years and was designed by the […] 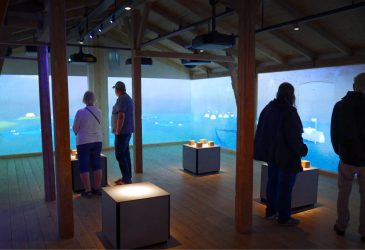 No Parking has  delivered  several digital installations for an exhibition at Tøndermarsken, about the marsh area in the Southwestern part of Denmark. The largest installation is ClimateLab where the visitors can interact with a projected landscape in a gamefied univers. Visitors are here surrounded by a large projected landscape on all walls of the room. […] 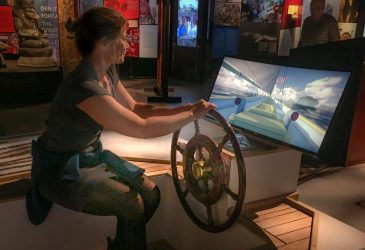 In November 2018, the Natural History Museum in Aarhus opened an exhibition about the famous sea explorer, Troels Kløvedal. The exhibit shows photos, videos and objects of cultural history. In the middle of the exhibition, a 1:1 model of a ship is built up. Here the visitors can explore sailing, on a simulator that No […] 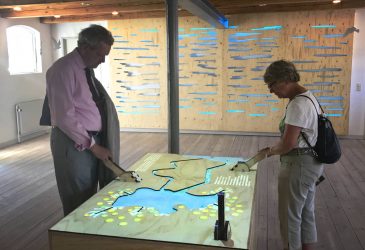 The new exhibition at The Esrum Monastery tells the story of the Kings of North Zealand National Park. No Parking has supplied all exhibits in the 3 central rooms: the Overview Room, the Forest Room and the Water Room. Each exhibition room is decorated with a light wall, using colored LED lights behind plates with figurative […] 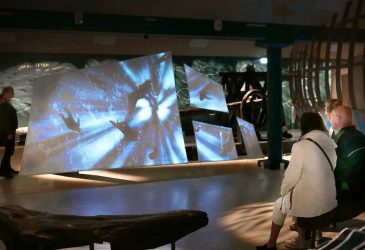 Christmas Eve 1811 the English warship “St. George” stranded on the Danish west coast. The event cost 1300 people lives, with only 13 sailors surviving. No Parking has helped bring the story to life, and created installations around some of the objects that were saved from the wreck. Projection & design One of the first […] 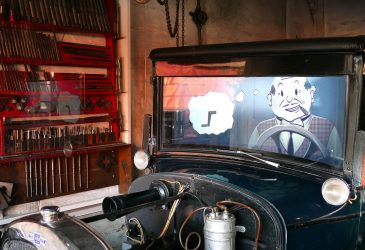 The historical experience museum “Den Gamle By”, has opened two new attractions from the beginning of the 20th century. One is an automotive workshop where you can see how a car engine was repaired in the old days. The second is a car dealer with three automobiles: a Ford Coupé, a Ford Sedan and a […] 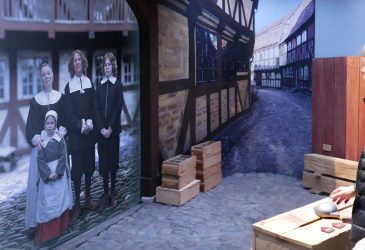 Aarhus Fortæller is a new permanent museum of 800 square meters in the Old Town of Aarhus. The museum tells the city’s history from the Viking Age to the present – and uses a modern implementation of narrative tales and interactivity. No Parking has delivered 5 installations for the new museum. Toldgame For the museum’s Renaissance section, we […] 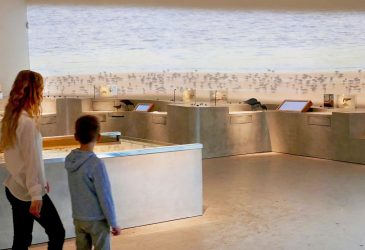 In 2014, the Wadden Sea in Denmark was listed as an Unesco World Heritage area. Only a few years later the Vadehavscentret can open with a new visitor center and a new exhibition. The new building was designed by architect Dorthe Mandrup and the exhibition by  JAC studios in consortium with No Parking. The consortium has been […] 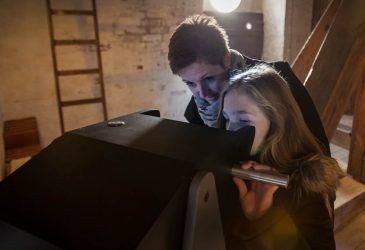 Roskilde city has undergone many changes since the Medieval Ages. At that time there was a travertine church on the “Stændertorv” square, which was replaced by a brick church a few hundred years later. Today the church is demolished, apart from its distinctive tower that serves as a museum. From the preserved church tower, you can look down over […] 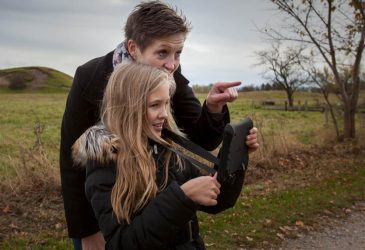 According to Danish chronicles and Icelandic sagas, Lejre has been home for the first Danish kings. The area around Lejre is characterized by bronze age graves, stone ships, and lately the find of remains from magnificent Viking halls. With all these stories in the backyard, Lejre Museum wanted to create an informative APP that visitors can use to explore the area. […] 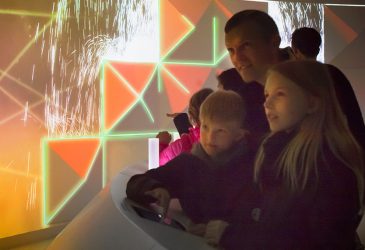 Ragnarock is a new museum for rock, pop and youth culture, located at the new Musicon area in Roskilde. The exhibition was divided into three tenders, of which No Parking has been responsible for the development and implementation of interactive installations in collaboration with the museum designers and consultants. No Parking has delivered 12 major interactive installations for RagnaRock. […]

Anguish and Fire is the title of a new and different exhibition at the Justice & Punishment Museum in Faaborg. The visitor is provided with a stable lantern and sent into the exhibition, which initially is only barely lit. When visitors move around, a warm light appears around them – their movements also triggering sound and projected imagery. In this way, […] 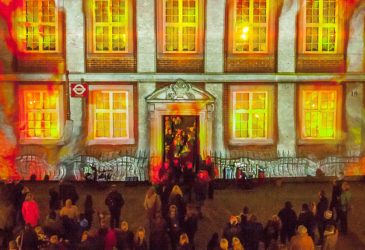 The National Museum always has a lot of offerings on the annual Culture Night, with many activities for both adults and children. On the Culture Night – October 9, 2015, visitors could experience a visualization of giant size, with a 41 x 12 meter projection on the facade of the Prince’s Palace at Frederiksholms Channel. […] 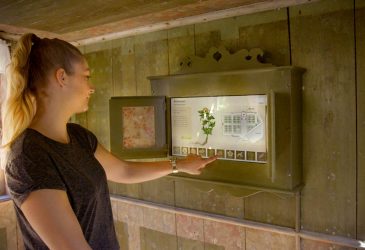 The Old Pharmacy is a historic building from 1571, which lies next to a  herbal garden in the Old Town in Aarhus. The building is the oldest of its kind, with an exhibition of a complete pharmacy interior –  it has now been brought to life with digital installations that inform about herbs and their […] 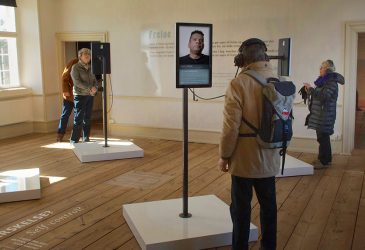 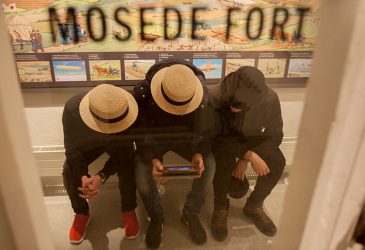 Dilemma1914 is a digital game about WW1, for schools and other visitors in Mosede Fort. A short film introduces the conflict: The users must choose what neutral Denmark should do, when approached by the Superpowers during the war. After this introduction they sent out in the fort with iPads, and will encounter 4 dilemmas where […]

No Parking delivered the content for a number of interactive narrative screens for “Suburbia – beloved and despised” and exhibition for the Workers Museum. The exhibition is about the working class’ relocation to suburbia. On the screens experts in architecture and anthropology appear. In the bottom of each screen is a bottom where the visitor […] 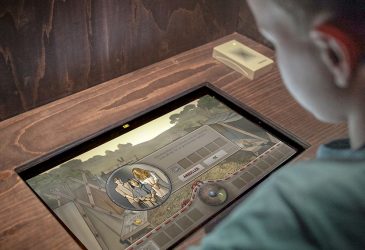 The Viking Ship The new exhibition at the National museum “VIKING” builds on the find of the world’s longest viking ship, that has not been exhibited before. The audience moves around the 37 meter long ship, which is central in the show. Artifacts telling about Viking trade, power, religion, and warfare, surround the ship in […] 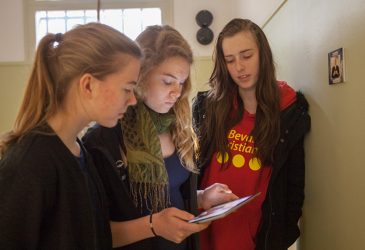 “Murder in the Arrest” is an interactive murder mystery, that is built up as a digital role play, where the user interacts with filmed actors. The plot takes place at the Faaborg Arrest, where a foul murder has taken place in 1945. The visitors at the present days museum at Faaborg Arrest, are handed an […] 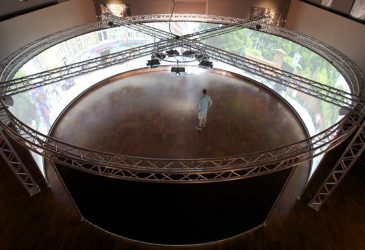 Project background Louisiana Museum of Modern Art is known for its international art- and architectural exhibitions. With the exhibit “New Nordic” they wanted to show the trends in Nordic architecture – a central part of it being an exhibit of architect Jan Gehl’s famous theories about human inhabitants. No Parking was contacted by curator Kjeld […] 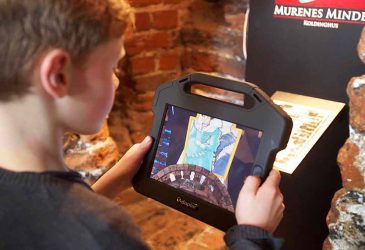 No Parking has participated in an innovative game project for Koldinghus Museum. The result is an application for children, that uses “Augmented Reality” to explore the historic past in an adventurous way. Through a game play children can experience historic artifacts come to life as 3-dimensional figures that send them around in the large castle […] 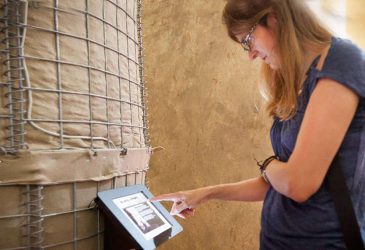 Development of the project From the beginning of the project, No Parking was part of a development team, that focused on creating a sensual and living exhibition. The focus of the project was to tell the story from the Danish soldiers point-of-view, in a set design that was as authentic as possible. In order to […] 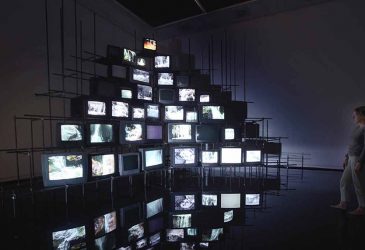 Sorry, this entry is only available in DK. 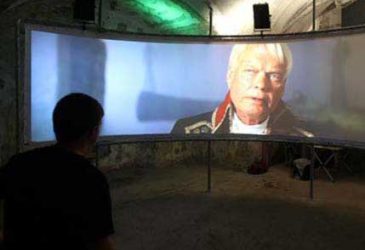 Development process In 2009 No Parking was engaged in the project by Bysted A/S. The process started with establishing a concept for the project “FORTIFICATIONS OF COPENHAGEN”, that apart from the Trekroner fortress, also covered the fortress Garderhøj and Vestvolden. Throughout the concept development, No Parking has participated in creating a communication strategy, with 3 layers: the past, […]

Throughout the years, numerous fossil remains have surfaced on Bornholm, witnessing that the island was once home to dinosaurs. This resulted in the experience center Naturbornholm wanting an installation where visitors could travel back in time, and experience these fantastic creatures. No Parking was given the assignment, and together with the museum, started to research […]

READ MORE
We use cookies on our website to give you the most relevant experience by remembering your preferences and repeat visits. By clicking “Accept All”, you consent to the use of ALL the cookies. However, you may visit "Cookie Settings" to provide a controlled consent.
Cookie SettingsAccept All
Manage consent