The Viking Ship
The new exhibition at the National museum “VIKING” builds on the find of the world’s longest viking ship, that has not been exhibited before. The audience moves around the 37 meter long ship, which is central in the show. Artifacts telling about Viking trade, power, religion, and warfare, surround the ship in 4 display zones.

Development of interactive elements
No Parking became early involved in the project, before the National Museum had locked down the activities for the exhibition. In advance an audience survey had been conducted, which showed that visitors were asking for interactive elements. It therefor became No Parking’s first assignment to explore these initiatives. The museum wished to get in contact with a young target group – those that do not normally visit exhibitions. On the basis of that, we decided to create an activity, that would almost serve as a computer game. 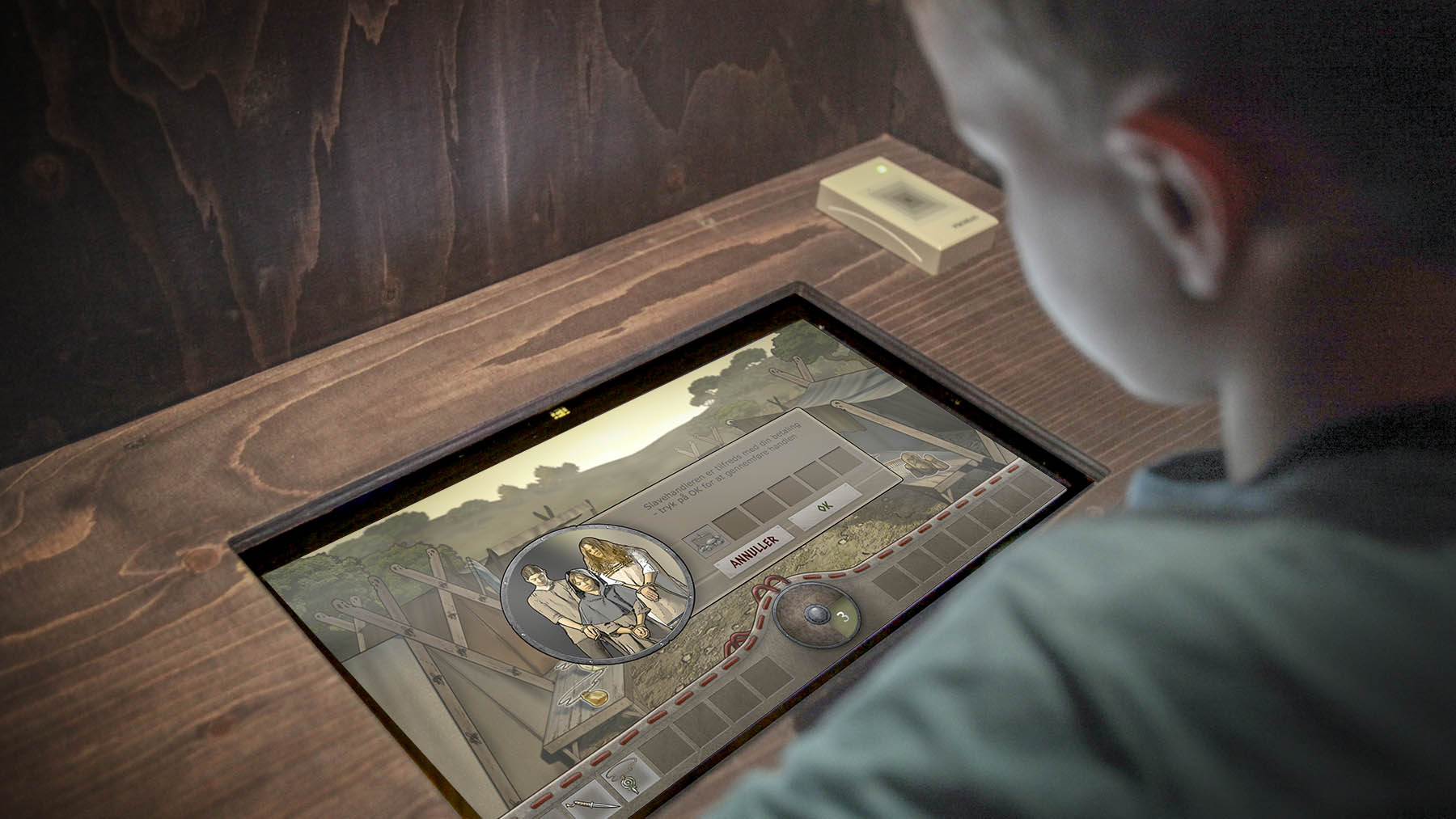 Interactive game
“The First Raid” is an interactive installation with 6 different posts throughout the Viking exhibition, where visitors can play and attempt to become “A True Viking”. The installation uses Touch Screens, which are activated by a game card  (RFID chip) which is handed out by the entrance. On the first post you create a Username, and select language. Then a video starts where you meet a viking, sending you off on a mission throughout the exhibition – you must solve 4 tasks before earning the right to go on a Viking expedition, where you can trade or plunder.

When you activate the different post in the exhibition, the screen begins playing a short video introducing the particular task. You must trade, choose weapons, make alliances, and sacrifice to the Gods, before you can go on the raid. The assignments are built up like in a computer game, where you can see what you earn in the game. Behind the scenes a server keeps account of your actions throughout the game, and finally evaluates if you have earned the right to be called “A True Viking”. The result is shown on the final screen, and can be shared on Facebook.

Apart from the fixed installation, that includes 12 Touch Screens with card readers,  No Parking has developed a mobile version of the game, that can be played on an iPad – for school children. This version utilizes an image recognition feature, allowing the user to scan markers in the exhibition area, and create site-specific storytelling. The application also features a task section, where the students can take a picture of an item, and answer questions about their choice.

Digital Rune Stone
Originally it was the intention that the results from the Viking Game, should be displayed digitally by a projection on a model of a rune stone. But there was a desire to free the Rune Stone from the game, so everyone could leave their legacy on the stone. No Parking therefore created a separate installation where you can enter text on a Touch Screen, and see it be “carved into stone”. The application uses a real 3D-engine that animates the text, so it appears to be embarked into the stone. Additionally we use a Kinect to detect audience motion, and see if anyone is approaching the Rune Stone, which triggers an animation that briefly shows the engraving in latin letters.

Press
The Viking exhibition has received great reviews in Danish newspapers. Politiken even printed a separate article about the interactive offerings in the exhibition, specifically highlighting the computer game positively. The Viking expedition is one of the most frequented exhibits at the National Museum in recent times.

Statistics
The viking game “The First Raid” was played by no less 16,668 visitors during the exhibition period from 20. June to 17. November 2013.