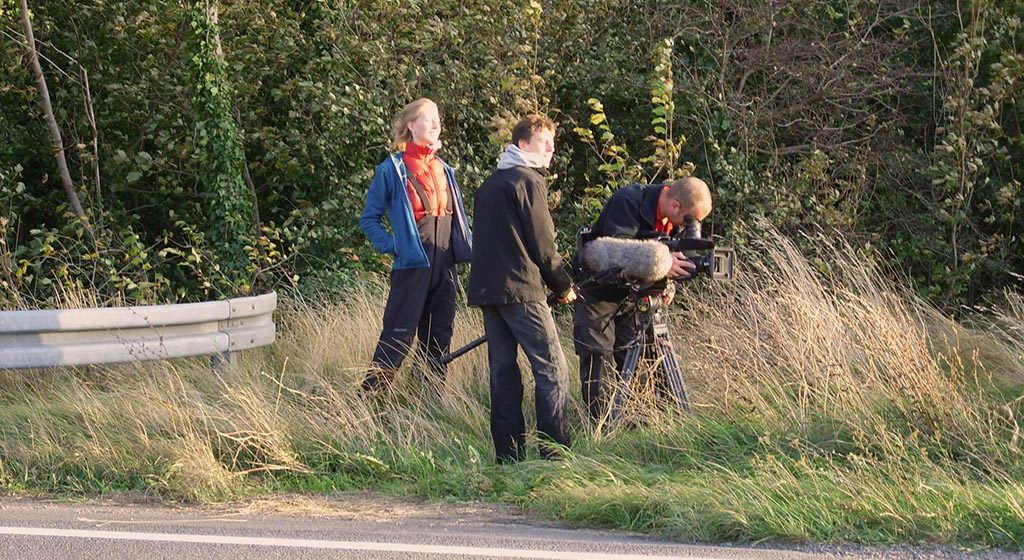 In 2005 No Parking made an animation project about dinosaurs for an cinema installation at the experience center Naturbornholm. The project gave us contact to leading dinosaur experts, who had lots of interesting stories to tell. This gave us the idea for a documentary project, that would combine the scientific stories with animated dinosaur sequences.

A visual proposal
No Parking contacted Danish Broadcasting Cooperation (DR) with a project proposal, and a collaboration began. From the beginning there was a positive reaction to the proposal of using animated dinosaurs, and therefore this was strengthened in the script, and given a lot of attention during the production of the film. In the finished film the animated sequences are often intercut with the documentary recordings, so the boundary between fact and fiction is very close. This makes the storytelling more interesting for the audience.

The charismatic Per Christiansen and the meticulous Jesper Milan, are the main characters of the film. We follow them on a visit to the island Bornholm, exploring places of dinosaur finds, in hope of finding another revolutionary fossil. The film also portrays the wild nature of Bornholm, when Per and Jesper have to walk through water or wilderness to get to the finding places. Finally our main characters end up in biologist Richard Bromley’s home, where dinosaur stories are told while tasting his home made alcohol.

3D-animation
From the beginning it was planned that the live sequences should be intercut with 3D-animated sequences of the dinosaur creatures, in order to visualize the images that our scientists have inside their minds. The quality of the animations had to live up to the audiences expectations, with competition from Jurassic Park, and Walking with the Dinosaurs. Therefore it was important to get the right people to make the animations.

The choice fell upon A-film, who had earlier helped No Parking on a small assignment. To make sure communication would run smooth, No Parking installed one of our own animators at A-films premises. In this way we could get the best of two worlds; the professionalism of A-Film, and a person who knew exactly what director Morten Ranmar intended for the film.